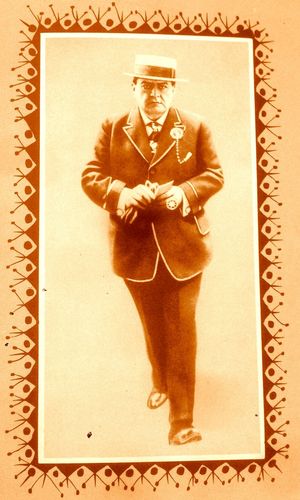 Today’s Faces in the Crowd post is a little off of my usual rock & roll beat but sometimes I find it necessary to wander off into one’s imagination from time to time.  With that in mind, today's blog post pays tribute to “Diamond” Jim Brady, one of the great American eaters of all time.

Brady was larger than life figure in America during the Gilded Age of the late 1800’s.  “Diamond” Jim was known for sporting flashy jewelry (hence his nickname) as well as having a gargantuan appetite.  Over the years, his ability to devour amazing amounts of food became legendary.

A true rags to riches story, Brady grew up poor, working as a telegraph messenger before acquiring his voracious appetite for the spoils of wealth. Born in New York City in 1856, Brady eventually secured work through the New York Central Railroad system. He went on to a lucrative career as a railroad-car builder and made shrewd moves on Wall Street that garnered him a fortune reported to be north of $12 million.

Brady, whose sizable wealth gave him unlimited access to the best food in America and Europe, was a frequent customer in many of the finest restaurants. 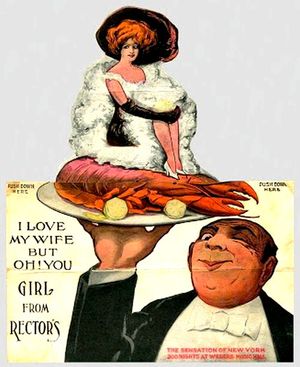 Brady’s favorite restaurant in New York city was a place called Rector’s, which was one of the most important restaurants in American social history. Established on Broadway at the dawn of the twentieth century, it operated at a time of sweeping social change. The transformation was nowhere more evident than in the theater district around Times Square.  Charles Rector, the owner of Brady’s favorite Broadway eatery, Rector’s, (located in New York city circa 1899 – 1919) remembered Brady as “the best 25 customers I ever had!”

“Diamond” Jim would start each day with a rousing breakfast of eggs, pancakes, pork chops, fried potatoes, cornbread, hominy, a large slab of beefsteak and some muffins.  All of those vittles would be washed down with a gallon of fresh squeezed orange juice.  “Diamond” Jim liked to call orange juice his “golden nectar”.  If the big fellow got hungry before lunch, he’d stave off hunger with a few dozen fresh schucked oysters or clams.

Lunch would usually consist of two large lobsters, devilled crabs, oysters, clams and some beef.  For dessert, Brady's taste ran to pies of all sorts.  No, he wouldn't eat slices of pie; he would consume several whole pies at lunchtime!

In the late afternoon, hunger would strike again, so Jim would chow down on a large platter of seafood.  This would be accompanied by copious amounts of lemon soda, which was another favorite of his. 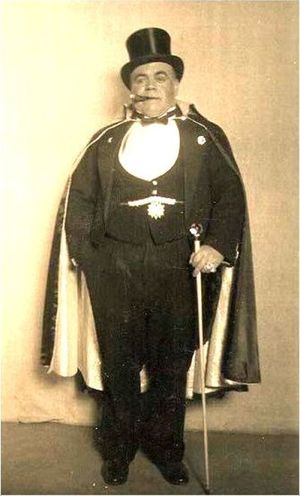 After dinner, "Diamond" Jim, being a big fan of the theatre, would wander out onto the streets of Broadway and attend one of the shows that were playing.  During the performance Brady often snacked on a couple of pound boxes of candy.  Jim knew his stuff when it came to the theatre; he claimed that George Bernard Shaw's works were best enjoyed with bonbons and Henrik Ibsen's shows with glace fruits.

Yes indeed...when it came to food, Brady knew what he liked and if he liked something, he would find a way to get his hands on it.  Once, while in Boston, Brady tasted some chocolates that he declared were the "best God damned candy I ever had!"  The makers of the chocolates, who produced their chocolate in a very small factory, were overwhelmed by Brady's enthusiasm for their product.  When Brady ordered several hundred boxes of their chocolates to send as gifts to friends and business clients, they told Brady they could not fill his order as it would deplete their entire stock of candy.  Unfazed, "Diamond" Jim wrote out a check for $150,000 to put towards the construction of a larger factory so they could produce enough of the cherished chocolates to satisfy his request.

Another legendary story about Brady's food lust concerns a dish called Filet de Sole de Marguery, which was only served at a restaurant in Paris named Cafe Marguery.  The recipe for this dish, which contained a delicious sauce, was a closely guarded secret by the chefs who worked at Cafe Marguery.  A fellow customer at Rector's had described the dish to Brady and he decided that he had to have it.  After Brady told Charles Rector that he would take his business elsewhere, Rector knew he had to act fast.  Rector quickly removed his son from Cornell University and sent him to Paris to get the recipe.  Rector's son went to great lengths to accomplish this task.  Using an assumed name, he took a job washing dishes at the Cafe Marguery and toiled in the kitchen for two years until he worked his way up to food preparation.  Eventually, the young man was taught the recipe for Filet de Sole de Marguery.  Upon his return to New York, He found "Diamond" Jim Brady waiting for him at the pier where his ship had docked.  Brady called out in a thunderous voice, "Did you bring the sauce??"

For any of you cooks out there, here's the recipe for the infamous Filet de Sole de Marguery from Chef Charles Ranhofer's cookbook, The Epicurean. 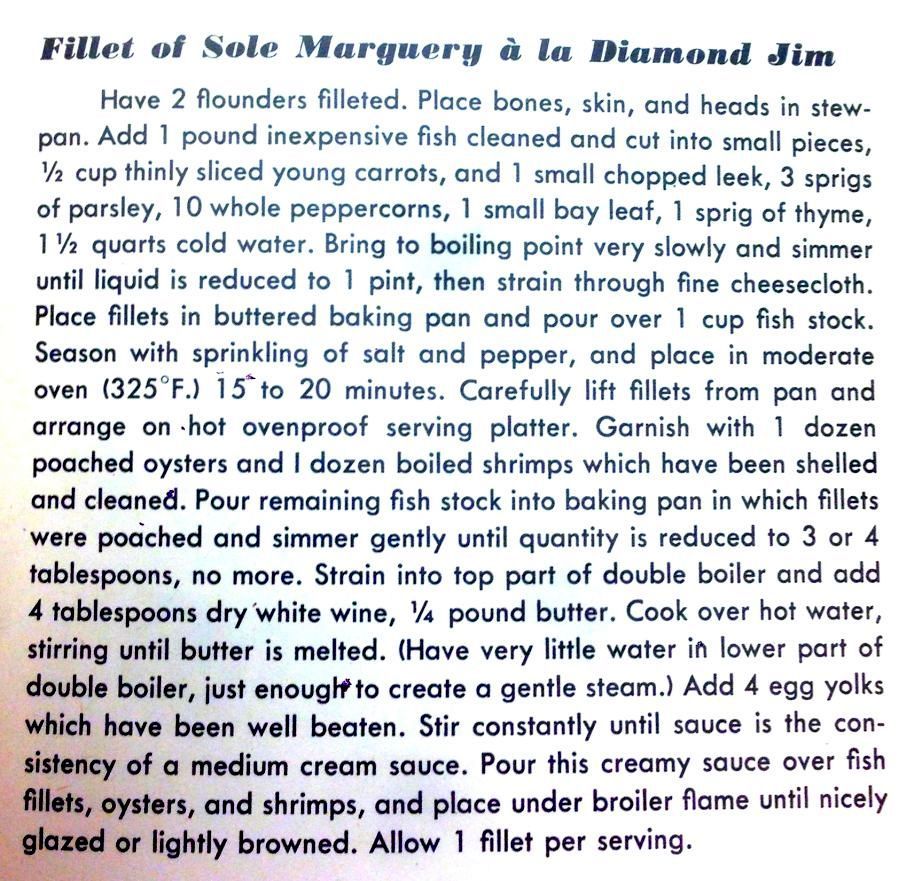 "Did Brady's celebrity win him a get-out-of-trouble ticket – or did he simply live in a time when being super rich brought immunity from scandal? As 'America’s greatest salesman,' Diamond" Jim frequently hosted parties of visiting businessmen whose contracts he was courting as a major player in the railroad equipment business. He could spend up to $3,000 (in 1904, equal to $82,000 now) for an evening’s entertainment which might also include the company of well-paid chorus girls or visits to women on the shady side of town. He freely poured wine for his guests, but he did not drink.

Despite the expensive dinners he gave, he showed a contradictory attitude toward restaurant spending. According to George Rector, Jim swore he would not come back to Rector’s after it levied a 10-cent cover charge. Of course he did return, but why argue over such a minuscule fee? And when he was charged with extravagance, he countered defensively that extravagance meant spending money you didn’t have or wasting it on worthless things. He, on the other hand, spent his well-earned money on simple dinners such as what he called his one two three: Lynnhaven oysters, terrapin, and canvasback duck. Expensive, yes, but not extravagant 'because you get your money’s worth.'” 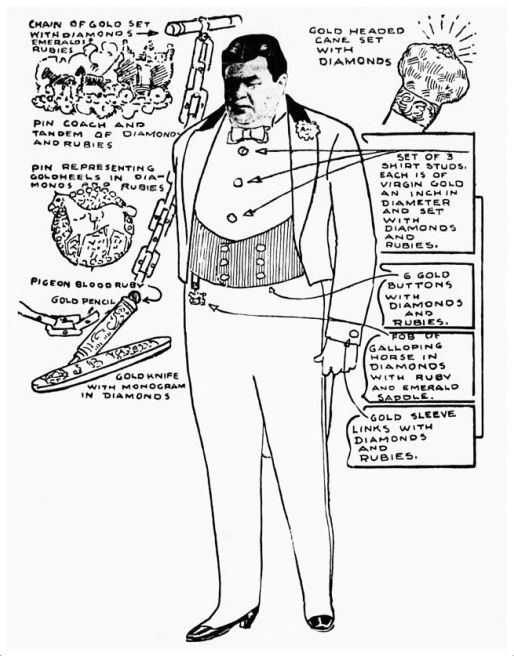 In the 1880's, Brady began acquiring and wearing diamond jewelry when he became a traveling salesman for a railroad equipment company. Back then, it was common then for traveling men to wear diamonds, and to gamble with them too. Brady was able to build a collection by winning at cards and dice. Displaying his collection to business associates and clients proved to be a good way to impress them and make sales. By 1893 he was ordering diamond-crusted pieces and sets that were custom designed exclusively for him. When he attended meetings of railroad directors he often wore his 'transportation set' that included cufflinks resembling tank and coal railcars, and shirt studs in the forms of a bicycle, auto, and airplane.

Brady owned more than 27,000 diamonds, including 31 curated sets—one for each day of the month. 'Them as has ’em wears ’em,' Brady was quoted as saying in the National Turf Digest. Brady was even known to wear diamond-studded underwear!

According to some accounts, his jewels may have made him a nationally known celebrity and an effective salesman, but failed to win him acceptance by genteel society. Perhaps he regretted his glittering reputation. Headwaiters bowed down to him but he was sometimes ridiculed in newspapers. The Baltimore Sun ran a story in 1913 titled 'Reckless Money Spenders of America in a Delirium of Extravagance Rival Rome’s Profligates' that spotlighted Diamond Jim and implied he bribed railroad purchasing agents.

He faced further unfavorable scrutiny the following year when testimony before the Interstate Commerce Commission revealed that the inexplicably debt-ridden New York, New Haven & Hartford Railroad Co. had, among other transgressions, bought railcars and equipment from Brady totaling $37 million without competitive bidding. In his ICC testimony Jim freely admitted that he had been very generous to the company’s officials – but simply because they were old friends. He also told the commissioners that he kept no books because 'I don’t propose that anybody else shall know how I have built my business.' " (restaurant-ingthroughhistory.com)

As time went on, Brady's overwhelming intake of food began to cause health issues.  "Diamond" Jim took on a new diet, which he was forced to implement after following a diagnosis of diabetes, seemed to have a disastrous effect on his health.  Brady died of a heart attack in 1917 at the age of 60—but not before leaving a giant-sized legacy. 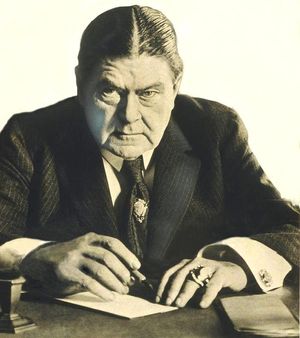 Once, at a dinner party, a woman who had been watching "Diamond" Jim attack several large platters of food, asked him how he knew when he was full.  Brady answered, "Whenever I sit down to a meal, I always make it a point to leave 4 inches between my stomach and the edge of the table.  And then, when I can feel 'em rubbin' together pretty hard, I know I've had enough."

Please note that 2 porkchops, 3 baked potatoes, a Waldorf Salad and a large bag of Cool Ranch Doritos were consumed while writing this blog post.  Huzzah! 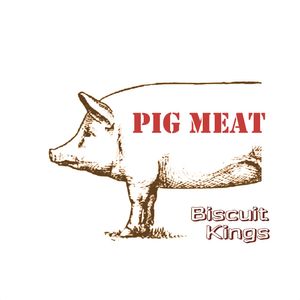 The new Biscuit Kings Single is out now!